How LASIK Helped One Man See Clearly, In More Ways Than He Imagined 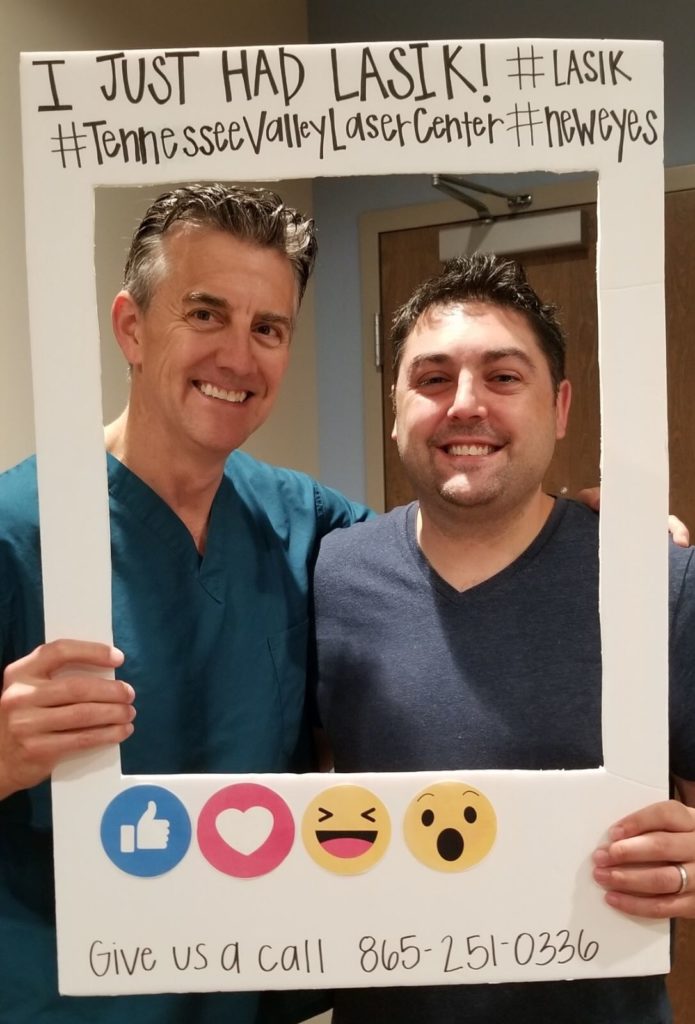 Have you ever wondered what it would be like to no longer need to wear glasses or contacts after you’ve relied on them for years? What if you could see road signs sharply in the distance while driving, or if your children’s faces were no longer slightly out of focus when you didn’t have your glasses on?

Gavin, a business owner and father of two young children, had been envisioning such scenarios after wearing glasses or contacts for 24 years since he was in the 6th grade.

“My eyesight has been terrible since I was a kid,” he said. “If I didn’t have my contacts or glasses I couldn’t see past 15-feet, so I wore glasses all through school.” When Gavin was in his late teens, his eye doctor told him he’d be a good candidate for LASIK once the development of his eyes stabilized in his mid-to-late 20s.

“He knew I’d be a good candidate in part because I’m a bad patient,” Gavin laughed, explaining, “I didn’t take great care of my eyes then, and until LASIK I wore contacts until I couldn’t see out of them. I wore monthly contacts, which are the longest you can buy, and I didn’t take them out when I should have.”

The Tipping Point To LASIK

Now 35, Gavin says he thought a lot about LASIK over the years since his eye doctor mentioned it when he was in his teens. In hindsight, he realized that two factors kept him from rushing towards LASIK sooner:

The tipping point that led Gavin to schedule LASIK surgery earlier this year was two-fold, and addressed both his fears about the outcome and concerns about the cost.

First, Gavin knew several people who had had LASIK surgery with Dr. Darin Smith at Baptist Eye Surgeons, and they recommended that Gavin talk with him about his concerns.

Gavin already experienced seeing halos to some extent from bright lights while driving at night, and occasionally had dry eyes from wearing contacts.

“I hadn’t thought of comparing what I might experience after LASIK to what I already experienced and knew how to deal with,” Gavin said. “To hear that was really helpful, and relieving in a way.”

Second, regarding the cost of the LASIK procedure, Gavin had started to compare some numbers. East Tennessee’s heavy, seasonal allergens and pollen were causing Gavin’s contacts to get grimey, quickly and easily. It became a constant chore to try to keep them clean, so he started wearing his glasses most of the time in the spring and fall.

Gavin knew wearing his old glasses wasn’t an ideal solution, and he also knew that he was due for an updated lens prescription—regardless of whether he wore glasses or contacts.

He said, “I knew I needed to buy new contacts and glasses, which would be probably $1,000. If I bought glasses or contacts and went to the eye doctor for updated prescriptions and check-ups, it would cost about $5,000 over the course of 3-6 years. The pay-back of LASIK became evident.”

Gavin’s LASIK appointment was scheduled with Dr. Smith at 7:15 on a Friday morning. “I got there at 7:10 and was out at 8:00,” he said, adding, “The procedure itself took about 10 minutes. Waiting for valium to take effect took longer than the actual procedure.”

Gavin was also surprised by the lack of discomfort or pain, saying, “Honestly, getting a cavity removed and filled is so much more painful than LASIK. They put numbing drops in your eyes, so you don’t feel anything. I could only feel a slight pressure, but nothing that hurt at all.”

As with any medical procedure, Gavin acknowledged there’s a fear of the unknown. “I joked with Dr. Smith that I don’t want to go blind, and I guess wondering if something could go wrong was a concern in the back of mind as much as getting on an airplane might be. I’m not the type of person who worries much about if things could go wrong, but Dr. Smith assured me it’s normal to think about it.”

Dr. Smith explained how the LASIK machine is state-of-the-art and makes a surgeon’s job much easier because of how accurately it measures the eye and the laser movements. He told Gavin that he would have a suction cup on his eye to help hold it still, but even if he moved his eye the machine automatically stops when can’t track the cornea. As a result, his eyelid or rest of eye couldn’t be “accidentally cut”.

Gavin only heard a slight tapping sound from the LASIK machine during the procedure, and said that the overall experience was calm and stress free.

After surgery Gavin was instructed to wear dark glasses for a period of time and he said that the biggest downside was some temporary redness in his left eye for a few weeks. “It didn’t hurt,” he said, “and other people I know had no redness after LASIK. It might just be something to take into account if you have family photos or a big event scheduled soon after surgery.

Two months post LASIK, Gavin’s vision is 20/15 in his left eye, and 20/20 in his right, nearly perfect. Aside from his greatly improved vision, the results have been a relief in ways that he hadn’t previously imagined.

“After LASIK I haven’t felt the need to put eye drops in every hour or even every day for dry eyes, like I used to. I also really like waking up in the middle of the night and being able to see without fumbling for my glasses.”

One of the biggest benefits, however, is the fact that—after 24 years of wearing glasses or contacts—Gavin doesn’t have to think about dry eyes or blurry vision anymore.

“I didn’t realize how ingrained it had become for me to be careful about not losing a contact in the shower, or in a pool, or to be careful not to rub my eyes,” he said.

“For the past 24 years, I’ve had to protect my eyes for fear of harming my vision or damaging my glasses or contacts. Now, if I want to go out on a boat to go tubing I wouldn’t have to worry about losing a contact, or about not being able to see. That’s a huge change. If I go mountain biking and get sweat in my eyes, I can rub my eyes.”

Gavin describes such realizations as a series of small, unexpected wins. “I wasn’t always conscious of how these little things held me back when I wore glasses or contacts,” he said, “but now the relief is real.”

If you’re curious about how LASIK might affect your vision and your lifestyle, an ophthalmologist can help you assess whether or not you’re a good LASIK eye surgery candidate and what you might expect from the outcomes.

Baptist Eye Surgeons is an ophthalmological practice in Knoxville, TN, and Morristown, TN, that specializes in LASIK eye surgeries as well as treatment of eye conditions like glaucoma, macular degeneration, and cataracts. To meet our doctors and learn more about our specialities, visit our website or give us a call at 865-579-3920 for more information, or conveniently schedule an appointment online.